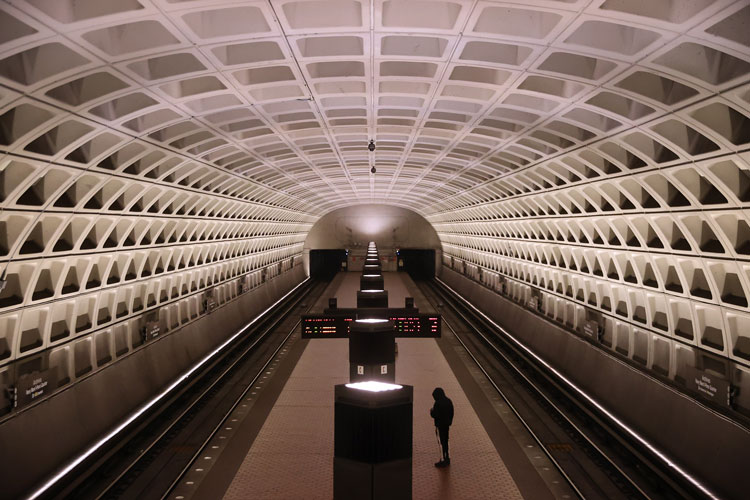 A single rider waits on a train platform at the Archives station in Washington on Wednesday. Chip Somodevilla/Getty Images

Stimulus bill passes Senate: The United States Senate voted 96 to 0 to pass a $2 trillion economic relief package meant to kick-start a moribund economy that’s been dragged down by the novel coronavirus pandemic and the stringent measures put in place to stop the virus’ spread.

The bill now goes to the House of Representatives, which plans to vote on it on Friday, leaders in that chamber said. If approved, the stimulus would be one of the most expensive pieces of legislation ever enacted by the US government.

The Senate shot down an amendment from Republican Sen. Ben Sasse that would have capped unemployment benefits at 100% of the wages workers received while employed. It was expected to fail. Proponents said the bill in its current form incentivized people not to work, while opponents of the amendment like Vermont Sen. Bernie Sanders said it was wrong to fixate on minor perks for working-class Americans while providing millions of dollars worth of bailouts to big corporations.

Deadliest day in US: While senators worked to get the stimulus past a major hurdle, medical workers faced one of the toughest days we’ve seen during the pandemic. More than 230 people in the US died of coronavirus on Wednesday, according to CNN’s tally, the most fatalities the country has seen in a single day so far during the pandemic.

To date, at least 65,273 coronavirus patients have been identified in the US. At least 938 have died.

Spain’s death toll passes China’s: The situation in Spain is even more grave — the total number of infections there is inching closer to 50,000, according to figures from Johns Hopkins University. At over 3,600 fatalities, the number of coronavirus-related deaths reported in the country has surpassed those in China. Only Italy has reported more deaths.

The Spanish government has voted to extend the country’s state of emergency in order to slow the pandemic within its borders.

Spikes in Japan and New Zealand: Authorities in both countries saw their highest daily jumps in cases Wednesday, with Japan identifying 98 patients and New Zealand 73.

New Zealand’s alert level has been raised to Level 4 — its highest — which significantly restricts residents’ movement. Tokyo faces a major test this weekend, as its governor has asked people in the megalopolis to stay home to avoid contracting or spreading the virus.