The death toll from the riots convulsing Delhi since Feb. 23 has risen to 34 with over 200 injured.

Yesterday (Feb. 26), at the city’s Guru Teg Bahadur Hospital in Shahdara area, 25 people died during treatment while two others succumbed to injuries at the Lok Nayak Jai Prakash Narayan Hospital near Delhi Gate, according to officials.

The situation turned more tense and murky yesterday (Feb. 26) after the body of an Intelligence Bureau (IB) staffer was found in a drain in the Chand Bagh area in northeast Delhi. This area of the city-state has borne the brunt of violence over the past few days over India’s controversial Citizenship Amendment Act, viewed as deeply divisive.

However, no new incidents of violence have been reported for nearly 24 hours now. The Delhi police has said that 106 people have been arrested and 18 reports filed over the violence.

Delhi chief minister Arvind Kejriwal, who called for the army’s help to quell the violence yesterday, visited the riot-hit areas in the evening.

“People of Delhi do not want violence. All this has not been done by the ‘aam aadmi‘ (common man),” he said, appealing for peace.

Police forces in Delhi’s neighbouring states of Uttar Pradesh and Haryana, too, have been put on high alert.

The Central Board of Secondary Education (CBSE) has postponed exams scheduled for today (Feb. 27) in northeast Delhi. However, exams in the rest of the city will be held as scheduled. 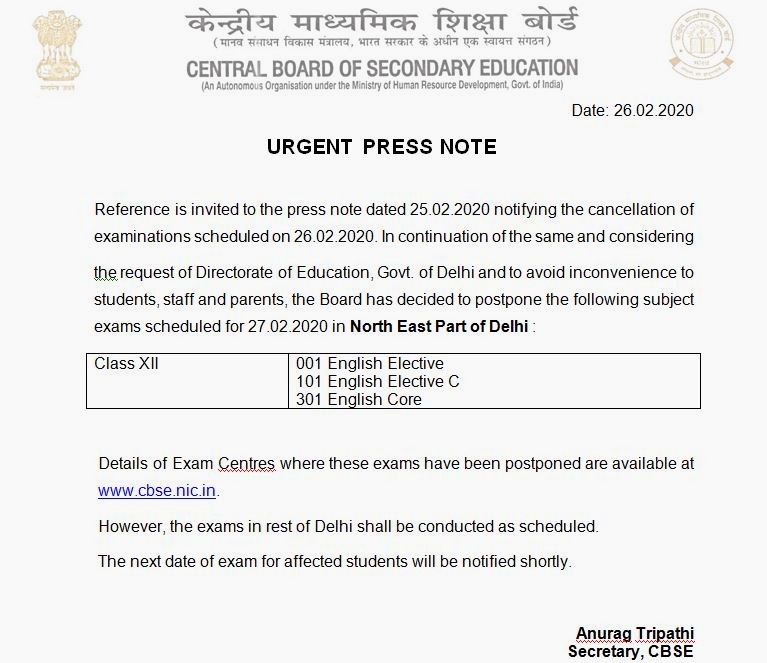 The US has advised citizens in New Delhi to be cautious. A similar advisory was also issued by Russia.

Prime minister Narendra Modi’s government drew flak yesterday from the Delhi high court for the situation going out of hand.

A bench headed by justice S Muralidhar passed a series of orders, questioning the role of the police in the wake of violence. It stated that “another 1984-like situation cannot be allowed to happen in the city under the court’s watch,” referring to the 1984 anti-Sikh riots that saw thousands of people belonging to the religious minority group butchered in Delhi and nearby regions.

India’s opposition parties and leaders, too, blamed the government for its failure to tackle the situation.

Yesterday, the Indian National Congress passed a resolution, stating that the violence was “a colossal failure of duty for which the entire responsibility must be borne by the central government and, particularly, the home minister (Amit Shah).” Communist Party of India (Marxist) general secretary Sitaram Yechury said the violence is a “chilling reminder” of the 2002 Gujarat riots.

South Indian actor-turned-politician Rajnikanth termed the Delhi violence a “failure” of the home ministry. “All protests that are happening in Delhi are because of intelligence failure. I condemn it. When a leader like (US President Donald) Trump is in the country, the intelligence (officials) should have been more vigilant. They didn’t do their job properly,” he said in Chennai.

Trump was on a state visit to the Indian capital when the violence broke out.

The Modi government has also been blamed by top US officials for failure at both economic and social front.

UN secretary-general, Antonio Guterres, called for maximum restraint in the wake of violence in Delhi.