“He has only scrimmaged twice,” Kerr said following Wednesday’s practice. “In fact, I think he needs to scrimmage more before he is ready to play. We’ll see how it all plays out.”

Curry – who broke his hand on October 30 – participated in a scrimmage on Wednesday morning, in a run that included Draymond Green, Juan Toscano-Anderson, Dragan Bender, assistant coaches Luke Loucks and Theo Robertson and Seth Tarver – who played collegiately at Oregon State and is a longtime friend of guard Klay Thompson. 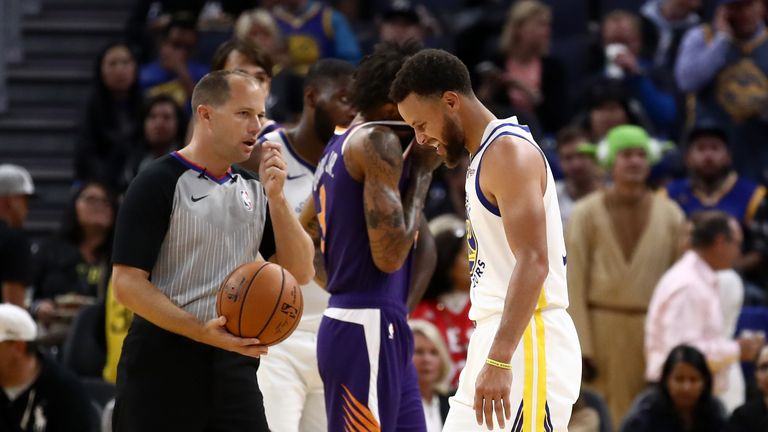 0:18 Steph Curry broke his left hand after Aron Baynes landed on him in an awkward fall during the Warriors loss to the Phoenix Suns

This was the second scrimmage for Curry during his rehab process. On Saturday, Curry also participated in a scrimmage. As he progressed, The Athletic reported that Curry will indeed make his debut Sunday against the Wizards, in line with what Curry has said on record in recent days.

Nonetheless, Kerr pushed back on the notion that the date is a formality.

Sunday’s targeted return date is a culmination of a rigorous rehabilitation stretch. In December, the two-time MVP underwent his second surgery to remove a screw in the second metacarpal. Since the surgery, Curry frequently has been seen on road trips participating in strenuous workouts following practices. Still, Kerr says the guard may not be ready.

“He has been out for four months and he has been doing a ton of individual work. But to put someone in an NBA game, you have to feel really, really comfortable that everything is there conditioning-wise, strength-wise,” Kerr said.

“And a lot of that you can’t simulate unless it is actual basketball. He has done everything that Rick (Celebrini, Warriors’ director of sports medicine and performance) has asked of him and more. Image: Stephen Curry shoots during warm-ups at a Warriors game

“His individual workouts have been taxing but two scrimmages against non-NBA players – no offense to them – doesn’t exactly qualify as perfect preparation.”

In the interim, Curry – who was averaging 23.5 points in four games prior to the injury – will participate in a scheduled practice on Friday before his re-evaluation on Saturday.