In a staggering 11-month rise, Vox doubled its number of seats in the Spanish parliament, becoming the third largest party. Their gains have prompted fears for further instability after the ruling Socialists took first place but with a reduced share of the votes. Spain’s caretaker prime minister Pedro Sanchez now faces long and arduous negotiations to form a government with no clear path to a stable majority.

He boasted of “consolidating a patriotic alternative” for Spaniards.

“We’ve said to the left that the story has not ended, that they do not have any moral superiority, that we have the same right as them to defend our ideas,” he added.

“Only 11 months ago, we did not have any representation in any institution. 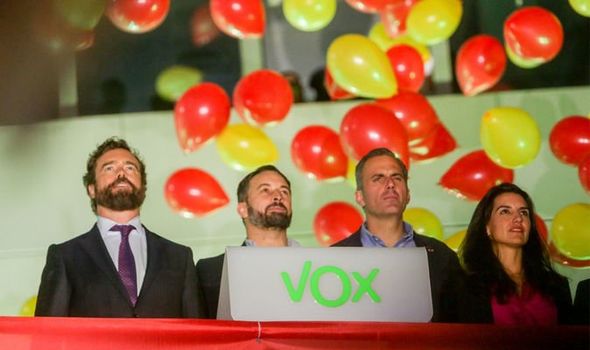 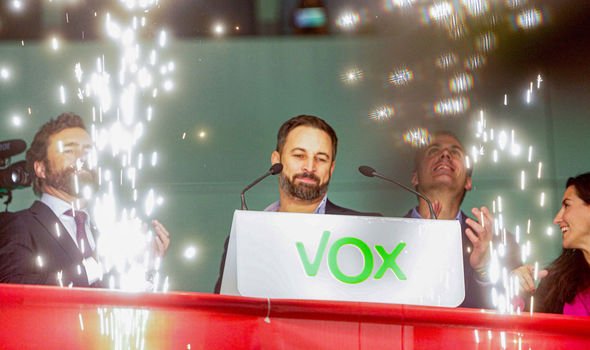 “We are the party that has increased most in seats and votes. We have contributed to the perfection of Spanish democracy.”

Vox rode a wave of anger against weeks of separatist protests in Catalonia.

Mr Abascal, 43, has called for direct rule in Catalonia and the abolition of Spain’s autonomous regions. 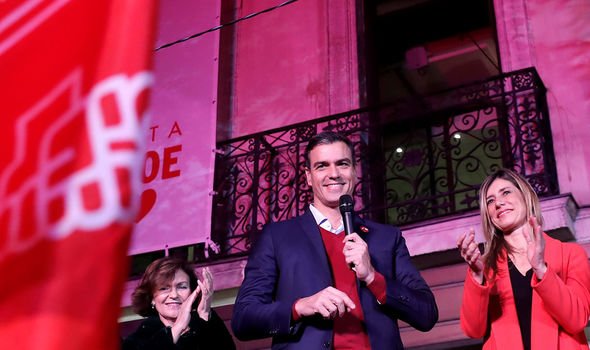 He has controversially been compared to military dictator General Franco, who ruled Spain from 1939 until his death in 1975, from left-wing activists.

The Socialists only secured 28 percent of the vote, a percentage point less than the last election.

Mr Sanchez triggered the snap poll after failing to win parliament’s backing to form a government.

He managed to win just 120 seats, falling well short of the majority needed in the 350-member Chamber of Deputies.

The caretaker prime minister said he would start contacting other party leaders today in a bid to break the political deadlock and form a stage, “progressive” government.

MUST READ: Spain to ‘take action’ if Belgium refuses to hand over Catalan leader 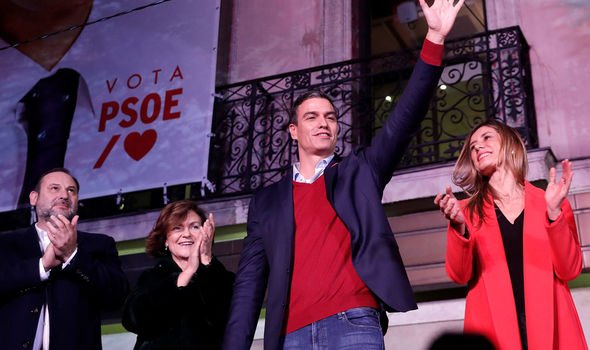 The centre-right People’s party won 88 seats, about four percent points above its share in the April elections.

Pablo Casado, its leader, called for Mr Sanchez to rethink his ambitions to form a government after the ballot results became clear.

“Spain has had a bad result,” Mr Casado said.

“Sanchez has lost his referendum, he is the big loser of today. He wanted a more governable Spain but now it will be much more difficult to form a government… He should think about his future.”

The left-wing Podemos party also saw its tally of seats drop from 40 to 35, leaving possibilities of a straight coalition with the Socialists impossible.

Pablo Iglesias, Podemos’s leader, said stopping the advance of the far-right makes it a “historic necessity” to form a coalition – an option Mr Sanchez rejected in September.

He pledged to “extend our hand to the Socialist Party and transform our country”.

It was now a “historic necessity to stop the rise of the extreme right,” he added.

Experts foresee a minority government led by Mr Sanchez’s Socialists as the most likely outcome as political deadlock continues in Spain.

Miguel Oetero-Iglesias, of the Elcano Royal Institute think tank, said: “The real option now is for an abstention by the PP party in a parliamentary confidence vote to avoid more elections, in exchange for Socialist party concessions in dealing with Catalonia and the budget.”

Ignacio Torreblanca, of the European Council on Foreign Relations, said: “Sanchez doubled down and failed.”