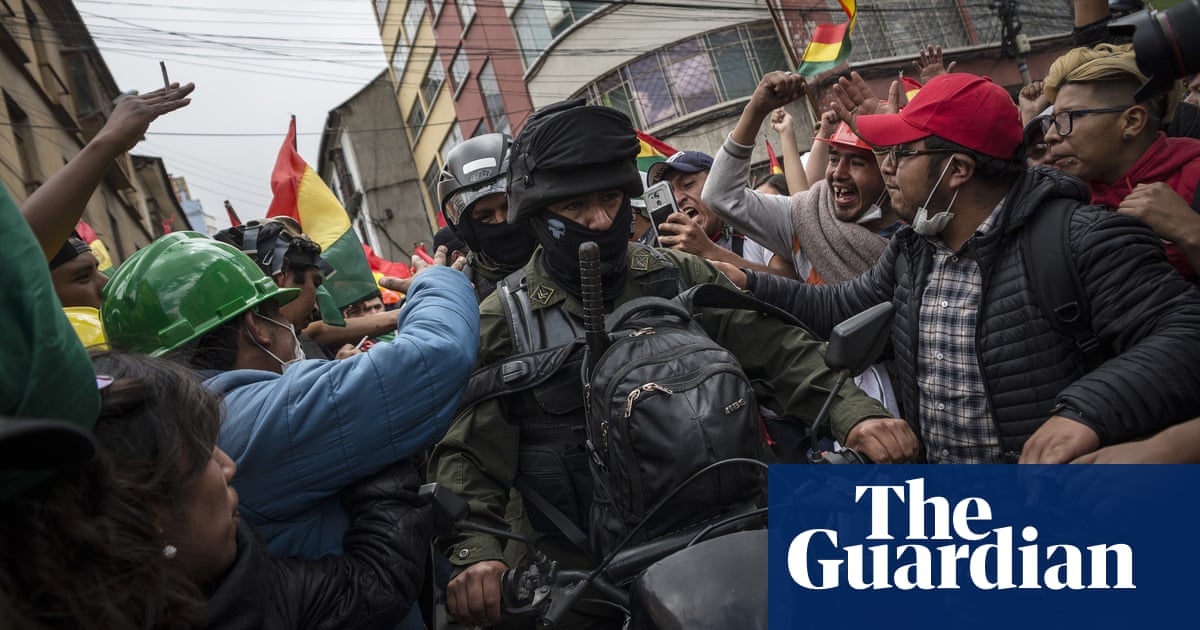 Police in Bolivia’s main city, La Paz, have declared themselves in mutiny, joining anti-government protests and fellow officers in at least six other cities. The move puts in serious doubt the president Evo Morales’ ability to hang on to power after weeks of unrest over disputed election results.

Local news reports on Saturday indicated that groups of police in the cities of Tarija, Oruro and Beni had joined their colleagues in Santa Cruz, Sucre and Cochabamba in rebelling against Morales’ government.

Flanked by military top brass, the chief commander of the Bolivian armed forces, Williams Kaliman, said on Saturday that the constitution prohibited them from entering into a confrontation with the people. On Friday the defence minister said no action would be taken against the mutinous police.

Morales called for an “open agenda debate to pacify Bolivia”, inviting four political parties to talks in a televised address on Saturday. He reiterated claims that a coup attempt promoted by “violent groups” and the opposition was trying to oust him from power and called on his supporters to “mobilise to defend Bolivian democracy and the people’s vote”.

However, his call for dialogue was promptly rejected by several political parties and his closest rival in last month’s election, Carlos Mesa, who as a candidate would not have been invited to participate.

Addressing Morales in a video message, Mesa suggested he should step down. “Your decision is what will define your own fate and the fate of Bolivia. We have nothing to negotiate with you,” he said.

In La Paz on Saturday, crowds draped in the red, yellow and green Bolivian flags surrounded the empty Plaza Murillo, or main square, as police deserted barricades and withdrew to a police station just a block from the city’s towering Casa Grande del Pueblo presidential palace and the parliament building.

Soon after, police officers with their faces covered announced that they would be joining the mutiny, raising the Bolivian flag in the square and singing the national anthem. Supporters chanted: “Police, you are not alone.”

“We are with the people. The government can’t use us to repress the people,” one officer, who did not want to be identified, told the Observer. “We, the police, belong to the people. We do not belong to a political party or particular government.”

On Friday night crowds cheered dozens of police officers who marched down a main avenue and garrisoned themselves in the city’s central police station. The mood was starkly different from previous nights of clashes as protesters surrounded officers singing: “Brother, police, join the people.”

“We are here to protect the police,” one protester, who did not want to give her name, said. “We don’t know what’s going to happen.” The mood was jubilant as tens of thousands of protesters filled the city’s downtown throughout the night singing and setting off fireworks.

“We want to support the police so they feel encouraged to join us,” said 21-year-old student Alexander Jiménez.

“Thanks to this man [Morales], all Bolivia has united,” said Mauricio Arambulu, 29, with a Bolivian flag tied around his shoulders. “La Paz is the city where tyrants fall.”

In rapid succession police units in the official capital, Sucre, and the most populous city, Santa Cruz, a bastion of the opposition, announced that they were joining the uprising launched by police officers in Cochabamba on Friday. Television images showed 18 uniformed police waving Bolivian flags from the rooftop of the special forces police station in Cochabamba to a cheering crowd.

Luis Fernando Camacho, a self-styled opposition leader who the government accused of inciting a coup, tweeted that he “cried with joy” and thanked the police for “siding with the people”. The leader of the Pro Santa Cruz civic committee has vowed not to leave La Paz until he delivers a pre-written resignation letter and a Bible to Morales.

At least three people have died, the latest a 20-year-old student on Wednesday, and more than 300 people have been injured in clashes between anti-government protesters and Morales’ supporters since the disputed election on 20 October.

In his toughest ever electoral race, Morales claimed victory with just enough votes to avoid a second-round runoff. But an unexplained 24-hour halt in releasing the vote results, which when resumed showed a shift in favour of the incumbent president, has fuelled accusations of fraud.

The widespread police mutiny had substantially weakened the Morales government, said Carwil Bjork-James, an anthropology professor specialising in Bolivia at Vanderbilt University in the Netherlands.

“The government is now obliged to manage the crisis without the police and attempt to offer a solution that addresses the large share of Bolivians who have no confidence in the election outcome,” he told the Observer. “Fresh elections under new electoral authorities can begin to satisfy the protesters.”

But they may not calm rising calls for Morales – Bolivia’s president for nearly 14 years – to step down. The Organization of American States is conducting an audit of the election count and their findings are expected next week. Neither Camacho nor Mesa say they will accept the results because they were not properly consulted about the process.

Amid a wave of demonstrations across the region, political analyst Ivan Arias said the Bolivian protests were centred on democratic rights. “What the people are asking for is that their vote is respected,” he said.