Devin Booker fired for 40 points as the Phoenix Suns handed Philadelphia a 114-109 loss to end the 76ers’ unbeaten start to the season. 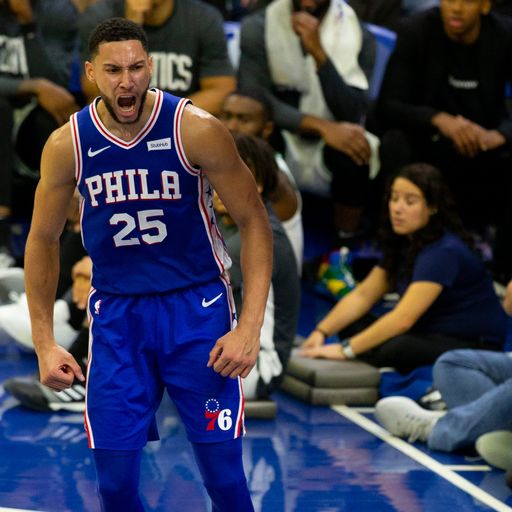 Devin Booker scored a season-high 40 points on Monday and Ricky Rubio added 21 points and 10 assists as the host Phoenix Suns handed the Philadelphia 76ers their first loss of the season, 114-109.

Aron Baynes had 15 points and made three three-pointers, Kelly Oubre scored 14 points, and the Suns shot 53.2 per cent from the field. Phoenix won for the fifth time in seven games, their best start since beginning the 2013-14 season with the same record.

Al Horford had a season-high 32 points and tied a career high with five three-pointers, Tobias Harris had 24 points and 10 rebounds and Furkan Korkmaz contributed a career-high 20 points for the Sixers. Philadelphia had been the last undefeated team in the league after winning their first five outings.

The 76ers played without leading scorer and rebounder Joel Embiid, who served the final game of a two-game suspension after an altercation with Minnesota center Karl-Anthony Towns last Wednesday. Kurkmaz started in his place.

Oubre made a free throw and Booker sank two for a 112-106 lead with 6.1 seconds left. Korkmaz sank his fourth triple with 3.4 seconds remaining before Rubio was fouled and made two free throws to seal the win.

Booker was 15-of-19 from the field, made 3-of-4 three-point tries and hit all seven of his free throws. At 213 years, five days, he became the eighth-youngest player in league history to reach 6,000 points. He needed 37 entering the night.

James Harden scored 44 points and grabbed 10 rebounds and led the Houston Rockets to a 107-100 victory over the host Memphis Grizzlies.

Harden was the foundation of a bounce-back effort for the Rockets, whose defense was torched for an average of 126 points in back-to-back losses at Brooklyn and Miami over the weekend.

Houston, playing without Russell Westbrook (rest) for the first time this season, leaned heavily on Harden, who added six assists. 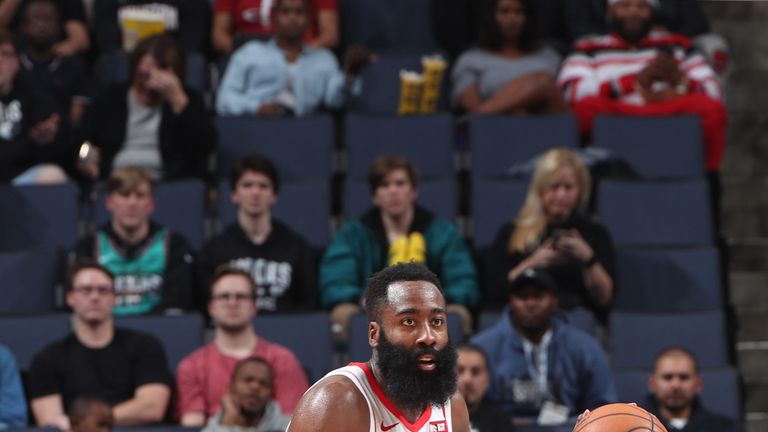 The Grizzlies held the Rockets to just one field goal over the opening four-plus minutes, but they led by only four points, 68-64, and then Houston’s Eric Gordon sank a three-pointer at the 7:19 mark to cut the deficit to one point.

Harden and Ben McLemore later combined for all of the points in an 11-0 run that carried Houston to their first double-digit lead at 81-70.

Kyrie Irving posted 39 points and nine assists while leading six Brooklyn players in double figures as the Nets nearly blew all of a 20-point lead but recorded for a 135-125 victory over the New Orleans Pelicans in New York.

Irving scored at least 20 points for the seventh straight game, matching Brook Lopez for the most in Nets history since the franchise moved from New Jersey in 2012. He posted his third 30-point game and scored 24 of his points after half-time while shooting 13 of 21 from the floor overall and hitting all 11 of his free-throw attempts.

The Nets rebounded from blowing a 14-point lead at Detroit on Saturday and headed into a five-game road trip at 3-4. They withstood a career-high 40 points from New Orleans forward Brandon Ingram and overcame the concession of 48 points in the third quarter.

Caris LeVert added 23 for the Nets, who shot 53.3 per cent and survived committing 23 turnovers. Joe Harris contributed 19 points, and Jarrett Allen collected 18 points and 10 rebounds as the Nets produced their highest point total of the season. 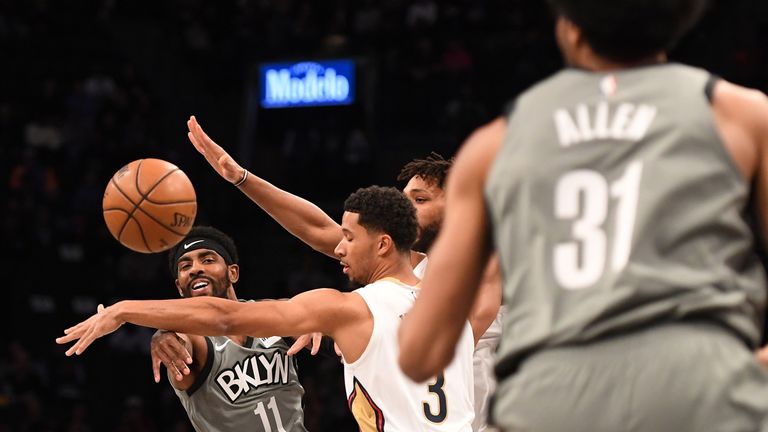 Image: Kyrie Irving throws a pass against the Pelicans

Ingram produced his first career 40-point game after missing the second half of New Orleans’ Saturday loss at Oklahoma City with a head injury. Jrue Holiday and Lonzo Ball added 15 apiece for the Pelicans, who fell to 1-6.

The Nets clinched the win when Harris hit an uncontested three-pointer with 53.5 seconds left for a 133-125 lead. Irving finished it off with two foul shots.

Giannis Antetokounmpo recorded 34 points and 15 rebounds as the Milwaukee Bucks rode a third-quarter surge to a 134-106 victory over the Minnesota Timberwolves in Minneapolis.

Antetokounmpo, who was named the Eastern Conference Player of the Week earlier on Monday, shot 14-of-19 from the field in a game that began with a delay of nearly an hour due to a basket malfunction.

One of the hoops was discovered to be uneven during warmups, prompting the delay of 59 minutes. Both teams were given seven-and-a-half minutes to warm back up before the pregame routine continued with the national anthem and player introductions.

Khris Middleton scored 26 points following a 9-of-15 effort from the field for the Bucks. Eric Bledsoe chipped in with a season-high 22 points after making 8 of 14 shots from the floor.

Andrew Wiggins recorded 25 points for Minnesota, which played without Karl-Anthony Towns as the two-time All-Star center served the second contest of his two-game suspension for an altercation with Philadelphia’s Joel Embiid.

Milwaukee scored 22 of the first 30 points in the third quarter, with Antetokounmpo working the interior while Middleton sandwiched three-pointers around a jumper to push the lead to 86-65. Donte DiVincenzo drilled back-to-back triples to cap the Bucks’ 38-point third quarter and push the team’s advantage to 102-82.

Bradley Beal scored 22 points to lead six Washington players in double figures as the Wizards pulled away in the second half to defeat the Detroit Pistons 115-99, snapping a three-game losing streak.

Three Wizards chipped in 12 points apiece, including CJ Miles, who was making his season debut after recovering from a foot injury.

Luke Kenard led Detroit with 24 points, and Andre Drummond had 15 points and 24 rebounds. Bruce Brown made his second start at point guard and finished with 14 points and seven assists. 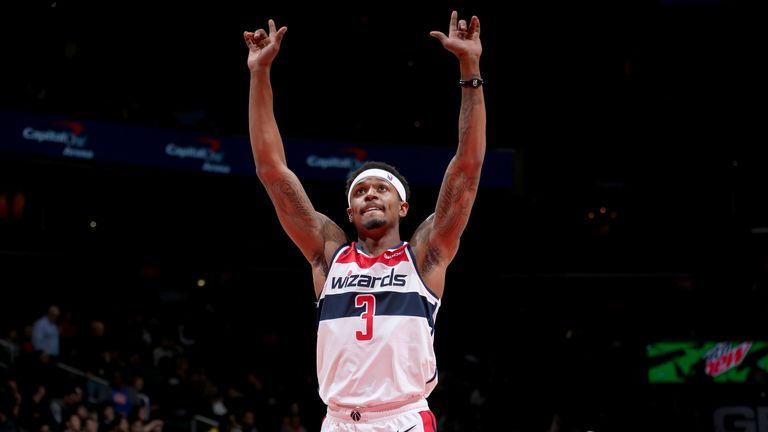 Image: Bradley Beal celebrates a basket during the Washington Wizards’ win over the Detroit Pistons

Isaiah Thomas made his first start at point guard for Washington, finishing with nine points and six assists in 24 minutes.